Posts Tagged With: the power of symbols 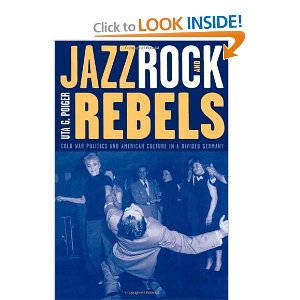 In an interesting cultural history, Poiger studies the impact of American culture – specifically American films, music, dance, and fashion – on East and West Germany.  Poiger studies these aspects of culture as artifacts that are imbued with multiple meanings in both East and West Germany as those two nations try to (re)establish a stabile German identity.  Poiger specifically looks at the ways in which the influx of American culture affected German notions of race and gender.

In her introduction, Poiger demonstrates that the 1950s were not the first moment in which American culture entered into German life.  She provides thumbnail sketches of German reactions to American culture in both the Weimar and Nazi periods, showing how the Nazis took an ambivalent, but mostly anti-American stance.  By the 1950s, however, American culture flooded into the two Germanys.  Poiger’s study shows that ironically, despite their differing socio-political stances, East and West Germany both initially had similar reactions against the Americanization of the youth in their respective countries.  “In often vehement rejections of American culture, both sides conflated uncontrolled sexuality, African-American culture, and German lower-class culture, and linked all three to fascism” (6).  West German leaders related Americanization (jazz music and consumer culture) with the emasculation of German men.  At the same time, they also saw rock and roll music and the rebellious lifestyle of movies like The Wild Ones as inspiring hyper-masculinity in its youth, something that many feared mirrored Nazi youth culture. In East Germany, leaders did not have to walk any line between honoring political alliances with the United States and rejecting American culture.  East German authorities were therefore free to reject American-style consumerism as cultural imperialism.

But in the competition for which German state could most successfully provide material goods for its populace, West German authorities ultimately saw American consumer culture as a tool against East Germany’s legitimacy.  So, it depoliticized American cultural artifacts.  Going to a rock and roll concert or wearing Wrangler jeans – while still cause for worry about deviant gender norms – was no longer seen as a political rebellion against the West German socio-political structure; it was “simply” cultural.  Leaders adopted new modes of understanding from American psychologists who deemed such rebellion as a temporary, though perfectly normal, phase of life known as adolescence.  Moreover, the “decadent” jazz music was “whitened” and turned into an acceptable, middle and upper class expression of music.

Her book is full of interesting examples of reactions to American cultural artifacts, but Poiger’s greatest contribution is showing how cultural consumption was a system of power plays in both Germanys.  The youth involved sought to forge their own new identities, a new “Germanness,” even though it did not match their parents’ definition.  The quest of West German authorities to depoliticize rebelliousness as a psychological phase was, itself, a political act to establish authority (136).  Moreover, Poiger reveals that while biological (eugenic) racial hierarchies may have been discredited by the Holocaust, eugenic discourse was still deployed in the Germanys to classify cultural artifacts.  American culture, especially African-American culture, was described as “primitive” and “degenerative,” with the potential to ruin German high culture (104), emasculate German men, and enflame hyper sexuality in German women (168).  By the end of the 1950s, this discourse of racial/cultural degeneracy was replaced by psychological understandings of rebellion.