Paralyzed, Moving a Robot Their Minds 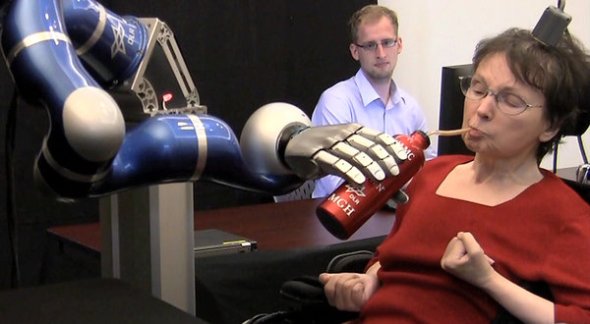 Cathy Hutchinson, one of the study’s subjects, uses a robot arm to serve herself a drink, a first for her in 15 years  since a stroke.

Two people who are virtually paralyzed from the neck down have learned to manipulate a robotic arm with just their thoughts, using it to reach out and grab objects. One of them, a woman, was able to retrieve a bottle containing coffee and drink it from a straw — the first time she had served herself since her stroke 15 years earlier, scientists reported on Wednesday.

“She had a smile on her face that I and the research team will never forget,” said Dr. Leigh R. Hochberg of the Department of Veterans Affairs, an author of a study reporting the achievement.

The report, released online by the journal Nature, is the first published demonstration that humans with severe brain injuries can effectively control a prosthetic arm, using tiny brain implants that transmit neural signals to a computer.

Scientists have predicted for years that this brain-computer connection would one day allow people with injuries to the brain and spinal cord to live more independent lives. Previously, researchers had shown that humans could learn to move a computer cursor with their thoughts, and that monkeys could manipulate a robotic arm.

The technology is not yet ready for use outside the lab, experts said, but the new study is an important step forward, providing dramatic evidence that brain-controlled prosthetics are within reach.

“It is a spectacular result, in many respects,” said John Kalaska, a neuroscientist at the University of Montreal who was not involved in the study, “and really the logical next step in the development of this technology. This is the kind of work that has to be done, and it’s further confirmation of the feasibility of using this kind of approach to give paralyzed people some degree of autonomy.”

The two people in this study, a 58-year-old woman and a 66-year-old man, are quadriplegic, unable to use their limbs as a result of strokes years ago.

Each had a tiny sensor about the size of a baby aspirin injected just below the skull, in an area of the motor cortex known to be active when people move their arms or hands. They learned to move a robotic arm, mounted at shoulder height on a dolly next to them, by watching the researchers move the arm and imagining they were actually controlling it.

The sensor — a chip of silicon with 96 pinprick electrodes connecting to a patch of neurons — transmitted those neurons’ firing patterns from this imaginary movement to a computer, through a wire. The computer recorded the patterns, then translated them into an electronic command: Move left, now down, now right.

With a little training, the two participants took control of the arm. It was the first time the man had used a limb of any kind in three years, and the first time in 15 years for the woman. Both were able to move the robotic arm and hand skillfully enough to pick up foam objects.

“It was encouraging to see that, 15 years after the brain was disconnected from the limbs, it was still able to generate all the neural activity necessary to make movements,” John P. Donoghue, a neuroscientist at Brown University and the study’s senior author, said in a conference call on Tuesday.

His co-authors included Dr. Hochberg, who is also affiliated with Brown and with Massachusetts General Hospital, and Patrick van der Smagt, of the Institute of Robotics and Mechatronics, in Germany.

The researchers still have many hurdles to clear before this technology becomes practical in the real world, experts said. The equipment used in the study is bulky, and the movements made with the robot are still crude. And the silicon implants generally break down over time (though the woman in the study has had hers for more than five years, and it is still effective).

No one has yet demonstrated an effective wireless system, nor perfected one that could bypass the robotics altogether — transmitting brain signals directly to muscles — in a way that allows for complex movements.

In an editorial accompanying the study, Andrew Jackson of the Institute of Neuroscience at Newcastle University wrote that economics might be the largest obstacle: “It remains to be seen whether a neural-interface system that will be of practical use to patients with diverse clinical needs can become a commercially viable proposition.”

But all agree that the new study — and the look on the paralyzed woman’s face when she served herself a sip of coffee — should give researchers the incentive and confidence to solve these problems.

The ultimate goal, Dr. Donoghue said, is to develop a system that is so effective and discreet that people with brain injuries “can interact with the environment without anyone knowing they’re using a brain-machine interface.”