Posted on January 12, 2015 by the Curious Wanderer 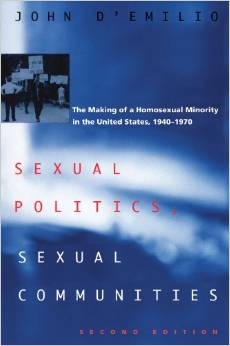 Main Points:  I know realize how fundamental this book has been to other scholars.  Many of the authors’ books I’ve read, including David Johnson’s, Margot Canaday’s, and Marc Stein’s, all build on D’Emilio’s work.  With that said, the story in Sexual Politics is now familiar to me, but it’s always nice to read the original work!

D’Emilio explains that World War II was a defining historical moment for the creation of a homosexual identity in the USA.  The mass mobilization of young people for the war effort (either as soldiers, laborers, or clerical workers for the expanding bureaucracy) took individuals far from the watchful eye of family, friends, and the church and placed them in new places (anonymity) that were often sex-segregated (like the military).  As a result, individuals who desired members of the same sex were able to realize that they weren’t alone and that there were others like themselves.  After the war itself was over, most of these same-sex desiring men and women (who were now thinking of themselves as a distinct group, defined by their same-sex interests) stayed in major ports of call like San Francisco and New York City, thus creating emerging gay sub-cultures.

As McCarthyism hunted out homosexuals in the government, the individuals who were forced out became politicized and joined (or formed) ‘homophile’ movements like the Mattachine Society (1951) or the Daughters of Bilitis (1955).  According to D’Emilio, this period from 1930-1950 was pivotal in the transformation of homosexual acts into definitive homosexuality – from a series of acts to an identity.

By the late 1960s, the sexual revolution and civil rights movement inspired some members of the homophile movement to radicalize their demands and goals.  The 1969 Stonewall Riots acted as a sparking point to ignite decades’ worth of movement and activism.  Out of this arose the gay liberation movement, which partnered (initially) with feminism and other groups calling for radical social revolution.

My Comments:  I think the greatest contribution of this work is that it historicizes Stonewall and shows that it was the culmination of decades of work that had been carried out by groups; it was not the start of the gay movement.  Later authors have built on D’Emilio’s work, providing more detail and nuance, but D’Emilio’s argument for the importance of the WWII era still holds true and this book was really groundbreaking in 1983.  Good stuff.

For more books on the history of sexuality, see my full list of book reviews here.