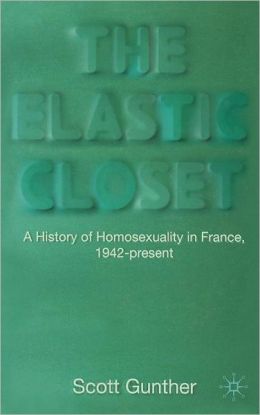 Subject:  A brief (124 page) survey of laws regarding and public attitudes towards homosexuality in France since 1942.

Main Points:  Gunther argues that homosexuality has enjoyed a unique place in society (and in law) in comparison to other Western nations.  This unique standing can be traced back to the French Revolution when the Republican ideals of “secularism, separation of public and private spheres, liberalism, and universalism” were espoused by the revolutionaries and written into law (1).  In 1791, the law against sodomy was stricken from the books since punishing acts between consenting adults would be seen as a gross breach of privacy.  The ideal of liberalism also held that a crime must have a victim, and in the case of consensual sex, there was no victim.  Gunther argues that the legal systems of other Western nations are also built on this principle, yet they – especially America – are more inclined to allow exceptions to this rule when the “victimless” crime has a long standing tradition of being persecuted.

The main point of Gunther’s argument is the ideal of French universalism, the idea that everyone should be equal under the law.  He argues that in one sense, this is an advantage for homosexuals (and any other minority) because it grants protection.  However, he shows that it could also serve as a restriction by emphasizing assimilation into mainstream, “respectable” French culture.  This is why the radical gay rights activists of the 1970s were unsuccessful in gaining any legal ground, Gunther explains.

But I’m not totally sold on this main argument.  He argues again and again that “though French lawmakers may have wanted to reinstate the crime of sodomy at various moments since 1791, they have not had the license to do so” because of the stringent dedication towards universalism (2).  Yet, though sodomy itself was never criminalized again, two of the main “characters” in his book are the 1942 law that raised the age of consent for homosexuals to 21 (while it remained 13 for heterosexuals), and the 1960 law that doubled the punishment for acts of public indecency when they were committed by homosexuals (as compared to heterosexuals).  The 1942 law was meant to protect “youth” from homosexuality (26), while the victim to be protected by the 1960 law was “the public” (35).  I think these two examples act as cases against Gunther’s own argument.  Sure, while sodomy itself was never re-criminalized, lawmakers found other ways to use the law to persecute homosexuals.  The concept of universalism did little to protect homosexuals in those cases.

In the 1950s and 1960s, homosexual “interest groups” appeared, but they had to be careful of not appearing “too different” (and thus “less French”).  Arcadie, for instance urged gays to be “respectable” and to not emulate the emerging gay culture from the United States.  However, in the general, radical unrest that emerged in 1968, radical gay groups (like the Front homosexuel d’action revolutionnaire) also stepped onto the scene.  They pushed for political reform and the repeal of the 1942 and 1960 laws.  However, they participated in American-esque identity politics and urged gays to take pride in being different (while they also campaigned for the acceptance of pederasty and public nudity).  Gunther argues that these radical groups were unsuccessful because they were, essentially, too radical and thus pushed the confines of the French “elastic closet” by violating the virtue of universalism.  Only more moderate and assimilationist movements like Comite d’urgence anti-repression homosexuelle were successful in promoting bourgeoisie values as the way to acceptance and legal reform.  According to Gunther, these movements were successful in winning the repeal of the two laws, as well as causing all gays to police themselves (since the state no longer had the means, or the ideological backing, to police them) through notions of respectability and assimilation.

The last chapter is interesting and has potential to be a research project in itself, I think.  He studies media outlets (two magazines and one TV network) to see how even these self-proclaimed gay media are restricting themselves by trying to appeal to republican universalism and present themselves as “general audience” outlets.  While one magazine claims to be for gays and lesbians, Gunther shows that it’s actually solely geared towards men.  The other claims to be for meterosexuals, yet only includes gay material; and the TV network PinkTV has consistently claimed to be for a general audience while all of its programming is gay and lesbian themed.  Gunther argues that they cannot “come out” and say that they are a “gay TV network” because that would be exclusionary and against universalism (the title of that chapter is “Outing the French Gay Media”).

My Comments: The book has/had potential, but leaves you feeling cheated.  It tries to cover 70 years in 124 pages, but the Introduction (which is 24 pages) traces Western legal handlings of sodomy back to the Roman Empire, so really, the space granted his actual topic is even less than what it first seems.

As for the arguments: I think they’re too general to be very useful as they are.  I think there may be something to the idea that the handling of homosexuality in France has been unique because of the ideal enshrined by the French Revolution.  But since he tries to cover so much in so little space, everything remains very generalized.  He does a service to remind us that laws don’t necessarily reflect public sentiment, and he raises a lot of interesting questions (which any good work should do).  But honestly, I think that’s his greatest contribution here: showing where more research can be done.  Moreover, the sources he uses and quotes will be helpful for someone who can approach this topic with a little more nuance.

For more books on the history of sexuality, see my list of book reviews HERE.