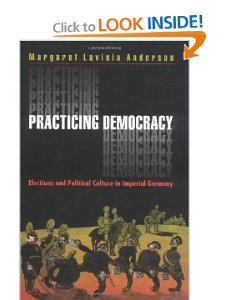 Positioning herself firmly against the Sonderweg thesis, Anderson reconstructs an entirely new understanding of imperial Germany.  Unlike Wehler, who views assemblies like the Reichstag as nothing more than the symbol of a sham constitutional monarchy, Anderson takes the Reichstag and its members seriously.  She does so because she argues that the members themselves took their positions seriously.  If we accept Anderson’s argument, we are forced to see imperial Germany in a whole new light.  Instead of a power hungry, conservative elite manipulating the German populace into submission and onto a “special path,” we see an active Mittelstand that took advantage of every opportunity given to it.  Moreover, assemblies like the Reichstag were not shams at all, but instead vital institutions that created and fostered a democratic culture in imperial Germany.

Bismarck implemented universal manhood suffrage for Reichstag representatives in 1867 as a way to implement (and control) socio-political reform from above and use the power of the masses for his own gains.  But Anderson argues that the Reichstag representatives (and the men voting for them) took the position seriously. The dual nature of the German system meant that the Reichstag neither chose nor could depose the government (10), and so Bismarck thought that he could tap into a larger power base without the uncertainties of democracy.  But, according to Anderson, the very fact that a democratic institution with universal male suffrage now existed began to cultivate a democratic culture among Germany’s male population.

So, the existence of universal male suffrage politicized millions of Germans beginning in 1867, but another important step came in 1903 when Chancellor Bülow granted secret ballots for Reichstag elections.  This was important, because up to that point, community leaders and bosses would use their influence to pressure voters to vote a certain way.  Making the ballots secret removed communal pressure and thus made Germany’s democratic institution more individualized.  Another challenge to communal pressure came in the form of the nationalist associations, which encouraged voters to throw off the chains of local pressure in exchange for larger, more nationalistic goals.  “It was not in the exercise of individual freedom, but in competition between groups that democratic practice took hold in Germany” (417).  Anderson argues that the first minority to fully politicize its members were the Catholics (84).

Moreover, as time went on the existence – and the growing power – of the Reichstag became not only taken for granted, but expected to be an integral part of politics.  And when men felt that their votes were being abused by unwanted influence, they appealed to the Reichstag and the government.  Anderson argues that the sheer number of appeals and vote challenges on any number of issues shows just how seriously people took this ‘experiment’ with representation (33).  And by the time the government threatened to do away with the Reichstag in the 1890s, they were continually thwarted, and the illegality of the government’s attempts seemed abhorrent to a group of men for whom a democratic sense had already been cultivated (247).

Ultimately, the Reichstag elections (and the corresponding political mobilization of the masses) acted as a legitimizer – both for the imperial institutions that created the Reichstag, but also for the opposition who now had a legitimate way to voice dissent.  Anderson’s work shows that while the Weimar Republic was Germany’s first democratic state, it wasn’t the Germans’ first experience with democracy.  They had “practiced” democracy for decades.