It seems like all I do is read…Sometimes I think my eyes are going to fall out of their sockets as I just go insane.  But, then again, I guess all that reading makes sense since I’m a historian (or maybe being insane make sense since I’m a historian?)  Either way – sane or not – I am fortunate that I do get to read so much.  Reading is a way to travel (even time travel!) to different epochs or far away worlds without ever leaving your doorstep.  Sometimes the places you go to aren’t so pretty (my dissertation explores different Holocaust memories), but other times, the words of others are just inspiring.

Most of my day is spent frantically reading through old newspaper articles, diary entries, other snippets from the archives, and stacks of history books.  But I try to keep a good balance of things I read:  In the morning, I read non-fiction.  During the day, it’s history research.  And at night, I read from a novel before going to sleep.  So, on any given day, I’m reading three different books, but as odd as it sounds, it’s a good way to keep myself sane!  I’ve shared many of my reviews of academic books, but this morning I wanted to share a few titles of the books I’ve recently read that have nothing to do with my research.

Every morning, after I catch up on the daily news and water our garden and flowers, I enjoy my last cup of coffee with a good, non-fiction book.  It’s my way of preparing myself for the day and trying to learn something new that doesn’t have anything to do with my research.

For the past year, I slowly made my way through Bill Bryson’s A Short History of Nearly Everything.  It’s a mammoth of a book that begins literally at the beginning of the time by exploring theories about the beginning of the universe and ends with the emergence of Homo sapiens.  In between, Bryson deftly leads readers through some (most? all?) of the major scientific developments in human history. 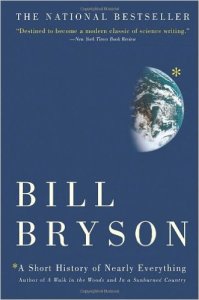 The amount of research required to write such a book is simply staggering, but Bryson’s major achievement, in my opinion, is the way that he weaves it all together into a narrative that is simultaneously educational and incredibly entertaining.  More than once I found myself laughing out loud as he let you in on some of the more obscure – and often absurd – secrets about the quirky personalities of the explorers, scientists, and curious amateurs who made significant (or not so significant) achievements in various fields.  But, of course, beyond entertaining you, Bryson teaches you something, as well.  After completing the book, I certainly feel more prepared on trivia nights!

Reading the book felt more like sitting next to Bryson and having a friendly chat; his writing style is simply that engaging.  Each chapter is only 10-15 pages, and they’re self-encompassing topics.  So, you can read one chapter at a time, and not pick the book back up for a week and not have to worry about remembering where you left off. (Between our wedding, our move, and working on my dissertation, it took me over 12 months to finally finish the book – but I think a partial reason it took so long is because I didn’t want it to end!)

The long, overarching narrative that Bryson weaves is fantastic.  You certainly are amazed by some of humanity’s achievements (even if they were accidents), but you also are left with a feeling that our present-day situation isn’t preordained.  There were so many instances when evolution, politics – human history in general – could have gone any number of different ways.   In other words, you’re left with a feeling of humility and appreciation for our world today.

After finishing Bryson’s book, I quickly devoured a short work called The Lena Baker Story, by Lela Bond Phillips.  It is an incredibly depressing account about the first and only woman to be executed by the electric chair in the state of Georgia.  The book was put out by a local researcher and published by a small company, so it’s not the fanciest history book out there.  And perhaps it’s just the historian in me being nit-picky, but I found some of the style choices of the book to be perplexing.  For example, when giving direct quotes (from courtroom testimony, for example), Phillips puts them in italics instead of just using quotation marks. 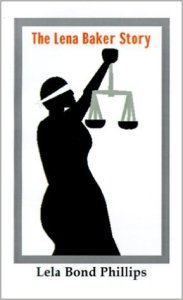 But, such technicalities aside, this is a commendable work of local history that documents the life of Lena Baker, who grew up in a small, rural town in southwest Georgia.  Lena had a hard life, from beginning to its early end.  She and her family were destitute, she suffered from alcohol addiction, and on top of all that, she was black in the Jim Crow South.  When she shoots and kills a white man in self defense, there is no hope for her in the justice system.  The jury assigned to her case is made up of white males who were friends of the man killed; Lena’s defense attorney gave a half-hearted attempt to put up a defense, and Phillips suggests that there was even some tampering with the evidence.  And readers know from page one that there is no happy ending.  Lena Baker was killed by electrocution in Georgia State Prison in the spring of 1945.

I read this book because I grew up in the same town as Lena, so for me, the book was almost personal.  I knew the buildings that Phillips described; I can picture the landscapes not from imagination, but from my memories.  That’s why the book was so upsetting to me.  This wasn’t a general story of systematic racism in a far away Southern town; these were people who walked the same streets as I did.  By the story’s end, I’m not sure if I was more angered or saddened.  I commend Phillips for attempting to be objective and for not passing judgment.  But, I know that if I had written this story, I would have lambasted those involved, from those who were supposed to be enforcing the law to those who masqueraded as defenders of justice: the lawyers and judge who couldn’t even be bothered to put up a good mock trial.

Just as I sat down to begin this post, I Googled “the Lena Baker Story” and found that the book was actually turned into a movie in 2008!  After watching a trailer for it, it looks like some of the names of people and places may have been changed, but it seems like it stays pretty true to the book.  Now I can’t wait to find it on Netflix or rent it from Amazon. Here’s the preview for the movie…But I also recommend purchasing the short book.

I’ve now started President Jimmy Carter’s memoir about his boyhood:  An Hour Before Daylight: Memories of a Rural Boyhood.  I picked it to read after The Lena Baker Story because I needed something a little less depressing to read in the morning.  I really love “Mista Jimmuh,” and not necessarily because of his politics or his presidency.  In all honesty, I haven’t really studied his time in the White House that much, but it seems like he may be a better ex-

president than he did a sitting president.  Either way, I love what President Carter stands for: peace, compassion, understanding, and education.  And while he’s a devout Christian, he’s not one of the judgmental Bible thumpers that I grew up around.  He’s intelligent and can grapple with “big picture” issues, but he grew up a poor farmer, so he certainly can understand the everyday man, too.  He’s usually calm and level-headed, but not afraid to speak his mind, even when his opinions aren’t popular.

I’ve had the pleasure of meeting Pres. Carter when he was back home in Plains, Georgia for a weekend.  His home is only about 20 minutes away from our farm, and my family and I even went to church with him.  We listened as he taught Sunday School, and his whole message was about compassion. I loved it.  So, now I’m excited to read this book and see what helped shape Jimmy Carter into the man he is today.

As I said before, I crack open a novel as I lay in bed at night and let the fantastical worlds take my mind away from the research on the Holocaust.  These books, I just read for fun.  To be entertained.

I recently read Stephen King’s The Shining.  I had never even seen the movie, but I loved the only other King novel I’d read (The Stand), so I thought I’d give The Shining a try. My god, it was truly horrifying!  It was probably not a good idea to read that right before trying to go to sleep each night.  Nope.

I’m an unabashed fan of the fantasy genre: the more magic, dragons, and imagined worlds there are in the book, the better.  Before I read The Shining, I read the first book in Patrick Rothfuss’ “Kingkiller Chronicle” series, The Name of the Wind.  It was pretty good, and I especially liked that it’s in the first person.  But, honestly, the book didn’t yank my chain, and I don’t think I’ll be finishing the series.  It’s no fault of Rothfuss,’ because he’s an excellent writer.  I just wasn’t in to the story.

I’m currently reading Of Bone and Thunder by Chris Evans.  It is, of course, a fantasy novel, but it’s slightly different than others I’ve read, because Evans was an editor of military historian for decades.  So, this story line follows soldiers in an army that is attempting to put down rebellions by some of the subjects in a far away, hot, jungle.  Of course, at first the enemy is understood as something sub-human (well, actually, they’re NOT human), but as time goes on, the soldiers enlisted to fight the war realize that they share an awful lot in common with the native “slyts.”   Even though they are “the enemy,” they have families, farms, joys.  So, it’s an interesting foray into the mindset that warfare cultivates – – – and it’s also awesome that there are fire-breathing dragons and academy-trained wizards.

And, of course I have to give another shout out to my favorite book series of all time (besides Harry Potter, obviously):  The Crossroads Trilogy by Kate Elliot.  My god, these are three fantastic books.  The amount of detail she gives in describing the world that she has created is impressive.  You can read my review of the series here.

Okay, that’s all, folks.  If any of the brief reviews and recommendations sound interesting, give the books a try!  Also, if you’ve got any excellent books that you think I’d enjoy reading, let me know in the comment section below :)