Posted on February 4, 2014 by the Curious Wanderer

My last post on my trip to Mumbai is actually about the main reason I flew to India in the first place: the wedding of my future sister in law.  I had always heard how grand and extravagant Indian weddings are, so when I found out that not only was I getting to go to India, but I was getting to go to an Indian wedding, I was just beside myself.

I should also note that, because of the fact that, for most of its history, what we today know as “India” was actually a collection of hundreds of kingdoms, languages, and cultures, it’s a little misleading to speak of a traditionally “Indian” wedding.  If you told an Indian that you were going to see an Indian wedding, they’d probably ask, “Yeah, but what kind?” – Meaning: which of the myriad of traditions in India is the wedding going to follow?  The wedding that I went to was a Punjabi wedding, since the bride’s mother comes from the state of Punjab.  So, all of these traditions I’m going to describe below are characteristic of a Punjabi wedding.  Here are a few of the things that I enjoyed the most – or just found noteworthy:

1) It lasted FOUR days!  Now, that doesn’t mean that we were all out Bollywood dancing in the streets for 96 hours straight.  But there were big, important ceremonies for four days in a row.

Day One: That night was a religious ceremony to kick off the wedding.   Drapes were hung on the apartment courtyard walls and a shrine was set up front and center for an idol of the goddess Durga.  Catering, a band, and a priest were brought in for the evening.  Family started showing up the night before, and it was a festive occasion.

But of course, the real stars of the show were the bride-to-be and her mom.  They. Were. Decked. Out.  The sarees they wore looked like they had just stepped out of the tales of splendor from the ancient days.  There was also bling.  Lots of bling – jewelry everywhere!  On the wrists, fingers, neck, on the saree, in the hair!

So, that night, the priest led some type of worship/blessing ceremony.  I didn’t have a clue what was going on, except that this was meant to bless the coming wedding.  Beyond that, I had to only imagine – the family was too busy with the rituals to have time to translate everything – and I think that even if it was in English, I still wouldn’t really understand it.  But, there were songs, and prayers, and some chants.  And then folks danced for a while.  During a pause, folks paid their respects at the altar, and then there was a little more dancing.  And then, there was eating!  Like most of the time, I had no clue what I was putting on my plate and in my mouth.  I just took my platter and got a little of this, a little of that, and hoped for the best.  And I wasn’t disappointed.

Day Two: This was the cocktail party – this was the one night we could indulge in our vices like alcohol and chicken.  The family had rented out a dance hall, which was nice since dancing was the focus of the night.  The bride, siblings, cousins, and even the little kiddies had prepared dances to perform.  So, one-by-one or in pairs, they got up on the stage and danced their little Bollywood asses off!

I think I had inadvertently offended some people – or at least disappointed them – when I didn’t dance with them the night before.  But, I really didn’t feel like breaking it down in front of people I’d only just met…to the tune of religious chanting.  So I promised them that I would dance with them at the cocktail party, even though I wasn’t doing anything for the ‘prepared dance’ portion of the evening.

So, when the last performance was done, and they opened up the dance floor, I finished my whiskey and Coke, and headed out there (I’d like to think that my royal purple and gold kurta was billowing in an unseen, slow-motion wind while dramatic music played, like in some Bollywood movie).  As I dared to glance back at the seats, I saw a look of excited surprise on everybody’s face, and that gave me the courage enough to break it down as far as my white rhythm and moves would let me.  But, it didn’t matter if I was a good dancer or simply having epileptic seizures, they were just happy that I got up there and danced with them.  The photographers loved it, too, and lots of people took turns taking pictures with me on the dance floor.  When they finally turned the music off and we decided to raid the buffet, no one would let me fix my own food.  They just asked what I wanted and then brought it to me.  I guess that’s the closest thing to feeling like a celebrity that I’ll ever experience!

Once I danced with them that night, I was in.  That sealed my fate as one of the family.

Day Three was full of more religious ceremonies that I didn’t understand.  The bride got something that looked like turmeric painted on her face – and my fiancé was inducted as a Brahmin, which means that he’s supposed to renounce all worldly pleasures and devote his life to education.  We’ll see how that goes! Later that evening, one of the aunt & uncles placed some blingy, red bangles on the bride’s wrists.  I’m still not sure what that meant exactly, but I think those bangles were blessed, too. 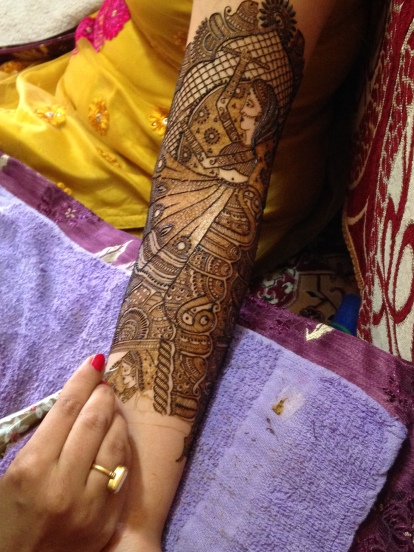 The bride getting her henna tattoos

Henna tattoo for one of the cousins

Day Four:  This was the day of the actual wedding ceremony.  The families had rented out a resort – there was a stage set up outside, lights, palms, fountains, and even a red carpet.  The stage was set up in front of an amphitheater – and every seat was filled.  I’d estimate that anywhere from 400 to 500 people were there that night.

The bride’s family arrived at the resort early to get dressed and make sure everything was set up.  Around 6pm, I heard a commotion in the distance – – a band, cheering, and then I saw fireworks.  “I wonder what’s going on over there,” I said to my fiancé.  He suddenly looked a little panicked, “It’s the groom’s family; they’re here…We’ve got to hurry up and get finished.”

Wait – what?  That’s the groom’s family?  I remember thinking to myself (my fiancé had already run off to let everyone else know – as if they couldn’t hear the commotion, too!)  So, yeah, the groom showed up with his own parade – marching band, performers, fireworks, and all.  And he was riding a horse.  Once they arrived at the gates, the band played another song, everyone danced, and the groom finally dismounted.  The bride’s family (all except the bride) was there to greet everyone and give them gifts.

The groom made his entrance and then went for a costume change.  Only after he came back and took his place on the stage were we allowed to go get the bride.  I can’t even begin to describe how beautiful she was.  Six of us held a cloth over her head and escorted her onto the stage where her groom and the world saw her for the first time that day. 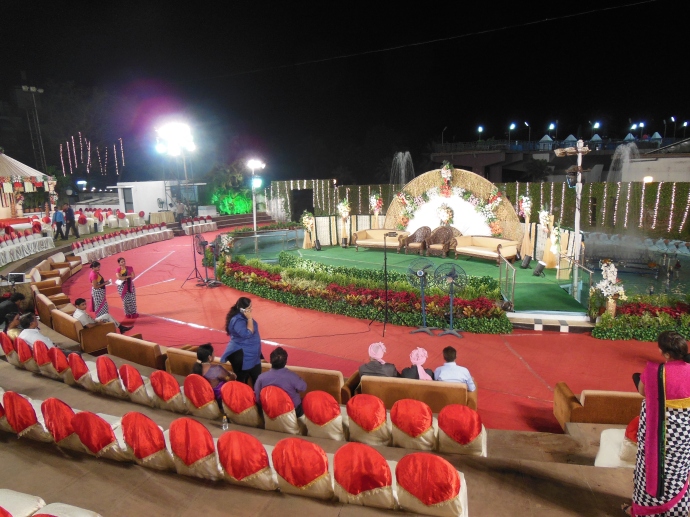 The stage for the wedding couple

And then, for hours, everyone who was there filed onto the stage to congratulate them and get a picture with the couple.  The gigantic buffet was open during all of this, and I snuck off stage a couple of times to go graze.

Then, by 11pm or so, everyone left except family and close friends.  I was afraid I had missed the actual wedding ceremony and I wasn’t sure when they had become man and wife yet.  But that was because they hadn’t.  All of that was just the reception.  The actual ceremony wouldn’t take place until two o’clock in the morning, which was when their priests had told them was the best time for their union.

Eventually, the date changed, people came up and wished me Merry Christmas (it was the wee hours in the morning of December 25 after all!), and then the couple went to the alter and spent about an hour doing some more rituals and saying, what I guess were their vows.  Finally, everyone clapped, and they were married.  Then her brother had to escort her to her new husband’s house as a symbol of her making the transition from one family to the other.  By the time we finally got to bed that night/morning, it was 4:30am – the wedding had lasted almost 12 hours.

2) The bride and groom were kept separate until the actual wedding day. One thing that I noticed about this Indian wedding, was that it seemed like it was more about the joining of two families rather than being just about the bride and groom.  One thing that led me to that conclusion was that the bride and groom didn’t celebrate together – even spend any time together – until the wedding night.  Both families had their own four days’ worth of ceremonies.  The groom and his family did make a short appearance at day one’s religious ceremony, but apart from that, everything was separate.  The wedding night was the first time that both families mixed together in a large celebration.

3) There was enough gold to make Smaug jealous.  Seriously, I’ve never seen so much gold in one spot.  Let’s not even taken into account all of the jewelry that the bride was wearing – I’m talking about just the gold that both families gave to her on the wedding night.  But, I don’t think it’s really just about jewelry and bling.  It’s also about financial stability for the new couple.  Those gifts of gold are meant to be investments in their future.  The bride will keep those necklaces, bracelets, rings, and earrings – maybe even wearing them on special occasions – as her own wealth, which she can rely on to support her family if something should ever happen.

4) My god at the food! Lastly, I’ll just quickly mention the food again.  Can you imagine four days of wedding feasts?  Sometimes I still dream about those spreads of food – those platters of Indo-Chinese food, pani-puris, noodles, curries, sweets, and naans.  Since I’ve already posted about Indian food, I won’t waste any more time on it here, but I just thought I’d mention that these folks barred nothing when it came to providing excellent meals for all their wedding guests.  It was simply marvelous.

Damnit…I’ve made myself hungry.  But, now that I’m back in Germany, I guess I’ll have to settle for a bratwurst.

To see my general thoughts on my three weeks in Mumbai, see my post “Welcome to India!”  Or, to read about Mumbai traffic, see “Hey! Rickshaw!”  And if you want to drool over some descriptions of Indian food, check out “Bo-Hawt Atcha-Hey!”