Posted on November 18, 2013 by the Curious Wanderer 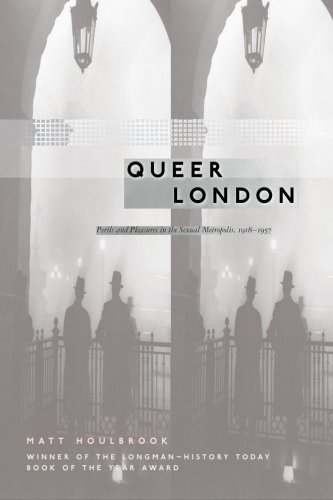 Subject:  An exploration of the variety of queer identities in interwar London.

Main Points:  Similar to Chauncey’s Gay New York, Houlbrook’s work studies the myriad of queer identities that emerged and thrived in interwar London.  Central to the book is its focus on spaces.  He gives importance not only to the parks, urinals, theaters, streets, pubs, and cinemas where queer men met, but also to the city of London itself.  The sexual practices and identities of these men “do not just take place in the city; they are shaped and sustained by the physical and cultural forms of modern urban life just as they in turn shape that life” (4).  So these “queer places” acted as more than a place to hook up; they became sites where a vibrant queer scene emerged as they provided these queer men with a sense of community with others like themselves.

Houlbrook’s discussion of space also intersects with class.  Working and lower class queers (the flamboyant queans, the West End Poofs, and the tough “bad boys”) were forced to meet in public places.  This made them vulnerable to surveillance and discrimination; in fact, most of what we know about this time period comes from police records. Middle and upper class queer men on the other hand were able to capitalize on their bourgeois affluence and cultivate their identities in the privacy of their own homes, thus largely escaping persecution.

Houlbrook’s book also shows that we have to be careful not to project our own understanding of “gay” back onto the past, even when it’s “only” interwar London.  Because the characters that he reveals don’t fit neatly into the 21st century “gay” identity.  Instead, flamboyant queans and “Dilly Boys” (of Piccadilly Square) identified more with their femininity than with their object choice.  Like the “trade” men of Chauncey’s Gay New York, the rough, masculine “bad boys” of London could have sex with queans (and with women) without being ‘homosexual’ or having their masculinity called into question…as long as they were the active, dominant partner in sex.  That is because a working class man’s reputation and identity were more based on his masculinity than on whom he slept with.  Class also ties in with this: Houlbrook argues that these “normal” men had sex with effeminate men also in order to make some money.  “I do not want to suggest that all young single working-class men participated or entered into ongoing relationships with other men, but they certainly all could, and their practice would be readily understood and accepted amongst mates” (181).

Beginning in the 1940s, London’s queer community underwent a transformation.  The middleclass “respectable” queer began identifying as “homosexual” in reaction to and shaping the medicalization of homosexuality.  What defined their queerness was their object of desire, nothing else.  They used their socio-political status as middle-class men to push for certain reforms, but Houlbrook almost paints them as being selfish.  They pushed only for their model of homosexuality, and only sought the removal of the words “in private” from the Criminal Law Amendment Act.  They began using their money also to “privatize” queer spaces by opening up nightclubs and charging admission.  Gradually, by the end of the 1950s, the publically effeminate quean and poof were replaced by an “invisible” middleclass homosexual.  These men, Houlbrook writes, “came out purely so that they could retreat, constructing a respectable subject predicated upon the space of the middle-class home” (257).  This transformation also had an effect on the tough trade men.  As the model of homosexuality took hold and queerness became defined by partner choice, working class masculinity changed and assertive, dominant sex with another man was no longer acceptable.

I think this is a great and interesting book.  I love his emphasis on space and how class played a role in utilizing space to help form identities.  I wonder if such ideas and analytical approaches could be used for rural settings, too, or if it’s unique to urban areas.

For more books on the history of sexuality, see my full list of book reviews here.