Deep in the Archives 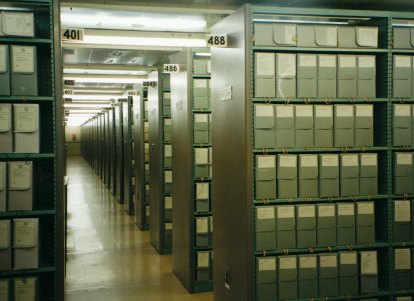 I recently won a spot for the German Historical Institute’s Summer Archival Seminar in Germany, so, I’ve been in Germany for a few days now, and we’ve been taking paleography lessons to learn to read old German handwriting (I’ll do another post on that later…It’s hard and I don’t want to even think about it anymore right now.

But we’ve been having the lessons at the Landesarchiv (state archive) in Speyer.  We’ll do the lessons in the morning, and in the afternoon we have other stuff to do – presentations on the best way to find research information – or the ten of us take turns presenting our dissertation projects and get feedback.

But today, the director of the archive (the same guy giving us our handwriting lessons) gave us a break for a little treat.  He brought out a few of the archive’s gems to show off to us.  First he pulled out a book from around the year 825.  It was a codex from an old German cloister, in which they recorded all of the daily going ons of the cloister – how much land they had, how much stuff they sold at markets, who worked for them, etc. etc.  It was in pretty good shape for a 1,200 year old book!  All of us history nerd were going crazy.  He also showed us a royal decree that was personally signed by one of the Holy Roman Emperors, plus a few other books that are centuries old.

He then explained how there was a change in paper production in the 1800s (or maybe he said late 1700s, I don’t really remember) that really had a drastic effect on the way history will be preserved.  Because more and more paper was needed by an increasingly more literate population, a cheaper method was produced, but the new method involved a lot of chemicals.  Because of those chemicals, paper (the paper we use today) cannot stand the tests of time. So, he told us that paper produced after 1800 will disintegrate one day.  That means that all of the record we have of things since then – from the world wars, form science, etc, will decompose, no doubt about it.  But he also said that the paper made before the 1800-ish divide (which is not made out of wood, like ours is today) will last forever, as long as it’s kept in a cool and dry environment.  Moreover, old ink was made differently – (with more iron I think he said) – so, even if it gets wet, it doesn’t bleed.

And THEN (and yes, this nerd fantasy continues), he took us on a behind-the-scenes tour of the archives.  We had a demonstration of how they restore old material – how they dry and wash off old mold and mildew – and how they even make new paper to perfectly fill in the holes that mold has eaten through.  They showed us one book, form the early 1500’s that was like the personal journal of an important bishop, that required over 300 man hours to completely restore.  But now, it’s reinforced with the type of paper that will never disintegrate.

My favorite part, though, was when the director took us into the vault, where they keep all of their most important and oldest books.  He told us about the security system that’s in place…It’s not meant to keep people out necessarily (though you do have to have a key card), but it’s to protect the books themselves from fire.

If a fire is detected, an alarm sounds – and anyone in there has 45 seconds to get out of the vault.  And then the door seals and pipes begin pumping CO2 (carbon dioxide) into the room to suffocate the fire (without oxygen, there’s nothing to feed the fire).  AND, that way the books don’t get wet.    And after a certain amount of time goes by and the fire still hasn’t gone out, sprinklers will engage as a last resort.  Because even if those old books get wet, they’re made out of the sturdier paper and ink, so it won’t be so catastrophic.  And then after the fire’s gone, the books would be freeze dried to kill mold spores before they’re re-stored in the vault.

But, obviously, books are more important than peoples’ lives – you’ve got 45 seconds to get out of there before the book defense suffocates you!

But – it was a really, really awesome tour.  Archivists are really the behind the scenes guys and gals that make historians’ work possible.  If they weren’t there to preserve everything, we’d have nothing to study!

Archivists are the protectors of history, standing guard against time and decay.  I tip my hat to y’all!