Posted on March 7, 2013 by the Curious Wanderer 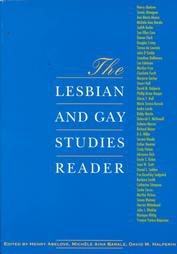 Subject: A collection of 42 essays meant to represent “some of the best and most significant recent English-language work in the field of lesbian/gay studies” (xv).

Points from the Introduction: Lesbian/gay studies cannot be defined exclusively by its subject, its practitioners, its methods, or its themes.  In this way, it’s women studies, which does not simply add women into the story, but instead urges scholars to look at the central role of gender in defining power relations in history.  In this vein, lesbian/gay studies does for sex and sexuality approximately what women’s studies does for gender.

Some of the essays:

Barbara Smith, “Homophobia:  Why Bring it Up?”

Homophobia, Smith argues, should be recognized as one of the “isms” (sexism and racism) that pervade American society.   Instead, she said, homophobia remains the one ism that is tolerated by people who would be averted to sexism and racism.  This is predominantly due to the fact that we do not recognize that all of these discriminatory “isms” are intricately intertwined.  “Ironically, for the forces on the right, hating lesbians and gay men, people of color, Jews, and women go hand in hand.  They make connections between oppressions in the most negative ways with horrifying results.  Supposedly progressive people, on the other hand, who oppose oppression on every other level, balk at acknowledging the societally sanctioned abuse of lesbians and gay men as a serious problem” (100).

Several misconceptions that help homophobia continue to run rampant:  1) a false distinction between a political vs. private concern, in which homophobia is seen as a private concern; 2) Thinking narrowly of gay people as white, middle class, and male, which is just what the establishment media want people to think, undermines consciousness of how identities and issues overlap.

Martha Vicinus, “”They Wonder to Which Sex I Belong”: the Historical Roots of the Modern Lesbian Identity”

In this essay, she traces the pitfalls accompanying some historians’ concern with the origins of individual and group identity – a concern that can limit its possibilities for inquiry by focusing solely on Euro-American instances where identity and sexuality are intertwined and where identity itself is a cultural value.  Ultimately, she argues that lesbian history must be written so as to include not only the dyke, butch, witch, and amazon, but the invert, femme, androgyne, and even the merely occasional lover of women (432).

D’Emilio explains that lesbian and gay people have not been present throughout history, that in the United States for instance there was no lesbian or gay identity and subculture until sometime in the nineteenth century, when the development of capitalism made our emergence possible.  Capitalism required a system of labor based on wages, rather than on either a largely self-sufficient household or slaver; and wage gave individuals a relative autonomy, which was the necessary material condition for the making of lesbianism and gayness.   He concludes that a new more accurate theory of gay history must be part of a political enterprise of gay/lesbian studies.

His essay not only explains the rise of the possibility for a gay/homosexual identity (and communities based on that identity) came from the rise of capitalism, but the rise of “the individual” was a result as well. Interestingly, he also concludes that scientific theories of homosexuality did not represent scientific breakthroughs, elucidations of previously undiscovered areas of knowledge; rather, they were an ideological response to a new way of organizing one’s personal life.  The popularization of the medical model, in turn, affected the consciousness of the women and men who experienced homosexual desire, so that they came to define themselves through their erotic life  (470-71).