Our Media, Ourselves: Are We Headed for a Matrix?

Posted on February 21, 2012 by the Curious Wanderer 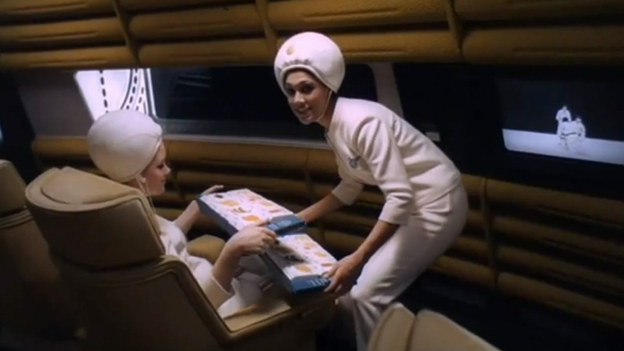 Design Within Reach? The cool sterility of 2001: A Space Odyssey is just one example of how pop culture expresses an anxiety that's seemingly about technology, but may be as old as time.

When Hollywood imagines the future, from Logan’s Run to Avatar, it tends to picture living spaces as sterile and characterless, without any cultural clues to the person who lives there. No record library, no DVDs, no Hemingway on bookshelves … often no bookshelves.

And here we are, catching up to that vision of the future. Sales of physical books dropped 30 percent last year, while e-book sales more than doubled. Sales of DVDs fell during that same period, while online streaming rose. And in 2011, for the first time, digital music downloads overtook sales of CDs. It’s as if we’re deciding en masse that when it comes to the arts and entertainment, we can do without the actual object that is the object of our affection. Who needs real-world clutter in an age when everything streams?

In short: “Welcome,” as Morpheus put it in The Matrix, “to the desert of the real.”

In that film, as you’ll recall, people interact in a reassuringly cluttered but virtual reality. Actual reality is barren. No stuff at all. Nothing physical to establish that one person is different from another. It’s a horror story in which humanity has abandoned all of what makes us human.

This fear of losing ourselves as we lose our stuff — is it just a product of our experiences with technology? Well, if you look at science fiction from the past few decades, you’d certainly think so. In the 1950s, the newness of television inspired Fahrenheit 451, where TV substitutes factoids for information and books are outlawed. A decade later, early spaceflight prompted the sterile domain ruled over by the computer HAL in 2001: A Space Odyssey. The gene-pool experiments of the ’90s prompted Gattaca, where genetic purity is mirrored by a brutal architectural purity.

But the computer age didn’t invent that fear. British author E.M. Forster had these same thoughts more than a century ago. In 1909, right after writing A Room with a View, he penned a story about a cave without a view — a sci-fi story called “The Machine Stops,” written almost pre-technology, in an age of gaslight and pianos in the parlor. Here’s a bit of the story’s beginning (read on-air by Jennifer Mendenhall):

Imagine if you can a small room, hexagonal in shape like the cell of a bee. It is lighted neither by window nor by lamp, yet it is filled with a soft radiance. There are no musical instruments, and yet this room is throbbing with melodious sounds. An armchair is in the centre, by its side a reading-desk — that is all the furniture. And in the armchair sits a woman, Vashti, with a face as white as a fungus. It is to her that the little room belongs.

Remarkably prescient, no? Considering that light bulbs weren’t yet common in houses, and the first radio stations wouldn’t be founded for more than a decade.

There are good reasons for imagining sterile environments in stories about the future. Space travel requires eliminating things that might float around in zero gravity; clean lines feel “modern” because they contrast with the accumulated mess of everyday existence. But isn’t accumulated mess what defines us as individuals? Forster thought so, and figured we’d grow isolated without it — so, almost a century before computer geeks got around to it, he imagined Skype and the iPad:

“The round plate that she held in her hands began to glow. A faint blue light shot across it, darkening to purple, and presently she could see the image of her son, who lived on the other side of the earth, and he could see her. ‘Kuno, what is it, dearest boy?’ ‘I want to see you not through the Machine,’ said Kuno. ‘I want to speak to you not through the Machine. I see something like you in this plate, but I do not see you. I want you to pay me a visit, so that we can meet face-to-face.’ “

Have a little … face time? The folks at Apple would recognize that. Imagine Forster’s horror if he could see people on a modern city street, avoiding eye contact and bobbing to the beat in their headphones. These days, we think technology is the culprit, but Forster was writing decades before TV started creating couch potatoes, almost a century before parents could complain about computer games turning kids into zombies. And still, his character Vashti doesn’t want to leave her little hexagonal cave. Why would she?

“Kuno’s image in the blue plate faded. For a moment Vashti felt lonely. Then the sight of her room, flooded with radiance and studded with electric buttons, revived her. Buttons to call for food, for music, the button that produced literature. And there were of course the buttons by which she communicated with her friends. Seated in her armchair, she spoke … while they in their armchairs heard her, fairly well … and saw her, fairly well. The clumsy system of public gatherings had been long since abandoned.”

Abandoned for chat rooms? Online dating? We’re almost there, right? Everything virtual until you’re actually in the apartment of a new acquaintance. At which point, what do you do? Scan the bookshelves and glance through the DVDs, looking for clues. Faulkner? Tom Clancy? There by the stereo, is that Sinatra or Sid Vicious?

A friend told me the other day that she had no CDs in her house anymore. All her music was on her iPod. She still has books, but she’s not buying as many as she used to. From the kid stuff in her entertainment center you’d guess she’s a Disney stockholder. But as her family outgrows those videos, so will her living room.

And her kids’ll be growing up in a world without hard copies of a lot of what members of their mother’s generation use to “define” living spaces and to tell people who they are. It’s fashionable to worry about whether these days, the media in people’s lives are supplanting the people in people’s lives, and about what’s getting lost as the world goes digital — all those cool album covers we had as kids, the stacks of paperback sci-fi novels, the toy soldiers. Won’t the next generation be isolated without them — cut off like Vashti, staring at screens all day?

“The room, though it contained nothing, was in touch with all that she cared for in the world.”

The title of Forster’s story, remember is The Machine Stops; it’s about overreliance on devices. But as in most dystopias, technology and the sleek sterile chill of modernity are stand-ins for the real culprit. Our anxiety is primordial — given voice in literature and art since whenever it was that people first gathered together. In caves maybe.