Posted on February 7, 2012 by the Curious Wanderer

Why, in the battle over Citizens United, the Supreme Court never had a chance. 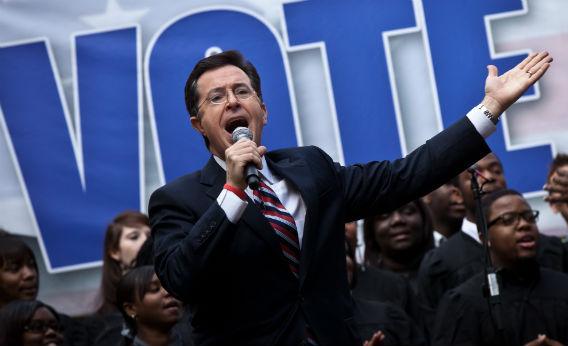 The Supreme Court has always had its critics.  Chief Justice John Marshall had to contend with the temper of President Andrew Jackson (“John Marshall has made his decision, now let him enforce it!”). And Chief Justice Charles Evans Hughes went toe-to-toe with FDR, who wouldn’t let up with the court-packing. But in the history of the Supreme Court, nothing has ever prepared the justices for the public opinion wrecking ball that is Stephen Colbert. The comedian/presidential candidate/super PAC founder has probably done more to undermine public confidence in the court’s 2010 Citizens United opinion than anyone, including the dissenters. In this contest, the high court is supremely outmatched.

Citizens United, with an assist from a 1976 decision Buckley v. Valeo, has led to the farce of unlimited corporate election spending, “uncoordinated” super PACs that coordinate with candidates, and a noxious round of attack ads, all of which is protected in the name of free speech. Colbert has been educating Americans about the resulting insanity for months now. His broadside against the court raises important questions about satire and the court, about protecting the dignity of the institution, and the role of modern media in public discourse. Also: The fight between Colbert and the court is so full of ironies, it can make your molars hurt.

When President Obama criticized Citizens United two years ago in his State of the Union address, at least three justices came back at him with pitchforks and shovels. In the end, most court watchers scored it a draw. But when a comedian with a huge national platform started ridiculing the court last summer, the stakes changed completely. This is no pointy-headed deconstruction unspooling on the legal blogs. Colbert has spent the past few months making every part of Justice Anthony Kennedy’s majority opinion in Citizen United look utterly ridiculous. And the court, which has no access to cameras (by its own choosing), no press arm, and no discernible comedic powers, has had to stand by and take it on the chin.

It all started when Colbert announced that, as permitted by Citizens United, he planned to form a super PAC (“Making a better tomorrow, tomorrow”). As he explained to his viewers, his hope was that “Colbert Nation could have a voice, in the form of my voice, shouted through a megaphone made of cash … the American dream. And that dream is simple. That anyone, no matter who they are, if they are determined, if they are willing to work hard enough, someday they could grow up to create a legal entity which could then receive unlimited corporate funds, which could be used to influence our elections.”

Then last June, like a winking, eyebrow-wagging Mr. Smith, Colbert went to Washington and testified before the FEC, which granted him permission to launch his super PAC (over the objections of his parent company Viacom) and accept unlimited contributions from his fans so he might sway elections. (He tweeted before his FEC appearance that PAC stands for “Plastic And/Or Cash.”) In recent weeks, Colbert has run several truly insane attack ads (including oneaccusing Mitt Romney of being a serial killer). Then, with perfect comedic pitch, Colbert handed off control of his super PAC to Jon Stewart (lampooning the FEC rules about coordination between “independent PACS” and candidates with a one-page legal document and a Vulcan mind meld). Colbert then managed to throw his support to non-candidate Herman Cain in the South Carolina primary, placing higher on the ballot than Rick Perry, Jon Huntsman, and Michele Bachmann.

The line between entertainment and the court blurred even further late last month when Colbert had former Justice John Paul Stevens on his show to discuss his dissent in Citizens United. When a 91-year-old former justice is patiently explaining to a comedian that corporations are not people, it’s clear that everything about the majority opinion has been reduced to a punch line.

Colbert took the mainstream by storm in interview after interview that schooled Americans about the insanity of Citizens United and garnered blowback from NBC White House correspondent Chuck Todd, who complained that Colbert is “making a mockery of the system” and questioned whether the real agenda was to “educate the public about the dangers of money and politics … or simply to marginalize the Republican Party?” Then came the un-ironic defenses of the irony of Colbert and the obligatory navel-gazing about whether Colbert is in fact effecting real change or in peril of succumbing to “irony fatigue.”

At one level, this is all just comedy, and it’s hard to measure whether Colbert’s sustained attacks on the court’s campaign finance decisions are having any real impact, beyond making us laugh. On the other hand, when the New York Times declares that Colbert’s project is deadly serious, and it’s just the rest of politics that’s preposterous, something more than just theater is happening. I spoke to Trevor Potter, former chairman of the FEC and adviser to John McCain, and the man Colbert has designated his “personal lawyer,” about the consequences of Colbert’s assault on the campaign finance regime. Potter is very careful not to ascribe an end game to Colbert’s efforts but says that he has seen Colbert’s campaign finance crusade as an “opportunity to open up to the rest of the world what we lawyers already know: that the whole area of campaign finance is a mess.” He adds that Colbert’s antics are “having a real effect in terms of public understanding about how the system works” and getting people to start to think about how to fix it.

Potter is also emphatic that the Supreme Court’s Citizens United decision is not the sole cause of the problems he sees. (You can thank the media for its bang-up job of suggesting that the court singlehandedly designed super PACs with its decision in CU). Potter says Kennedy’s majority opinion is not so much disconnected from reality but, rather, “assumed that the world would work in the way he thought it would.” (In Kennedy’s fantasy, there would be no chance of corruption, no coordination between PACs and candidates, and full disclosure of corporate contributions.) And had the FEC done its job, had Congress passed better disclosure rules, had shareholders been better able to control corporate activity, the Kennedy decision would have been less monumental. (Potter is quick to point out that the court needn’t reverse itself completely for the country to fix the worst problems in the post-CU system.) Still he adds thatCitizens United “epitomizes the problem of having a court where no justice has ever run for any office, including dogcatcher.”

Of course that’s precisely the problem: The institutional aloofness that allowed the Roberts court to pen such a politically naive decision is the same blind spot that precludes them from even understanding, much less responding to, the media criticism. And as professor Lyrissa Lidsky, who teaches law at the University of Florida College of Law, reminded me last weekend, there is amazing language in Justice Kennedy’s majority in Citizens United about the need to elevate corporate speech to the same protected status as that enjoyed by the cable news shows. As Kennedy observed, “Speakers have become adept at presenting citizens with sound bites, talking points, and scripted messages that dominate the 24-hour news cycle. Corporations, like individuals, do not have monolithic views.”

In other words, (if you can stand the irony) in Citizens United, the Supreme Court empowered Colbert to create a super PAC so he could answer back to, well, folks like Stephen Colbert. The opinion even notes that “Mr. Smith Goes to Washington may be fiction and caricature; but fiction and caricature can be a powerful force.” Now, courtesy of Mr. Colbert, no one knows that better than the court itself.