How 9/11 Changed Us: Welles Crowther

Posted on September 7, 2011 by the Curious Wanderer

A 2nd of USA Today‘s personal snapshots of life after 9/11.  This one follows the family of a young man who helped many people escape the North Tower before its collapse.

The family of a man lost in the 9/11 terror attacks wonders how he died, and what he was doing at the end.A red bandanna, which gives rise to a legend, helps answer those questions.

9.11.2001: Welles Crowther, a 24-year-old equities trader, is working on the 104th floor of the south tower of the World Trade Center when the first hijacked airliner hits the building’s twin. He leaves a reassuring phone message for his mother at home in Nyack, N.Y. After that, nothing. His parents are left to wonder: How did he die? What was he doing at the end?

11.1.2001:Ladies’ Home Journal publishes a first-person account by Judy Wein, an AON Corp. vice president who was injured and narrowly escaped from the south tower on Sept. 11. She writes: “A man with a red handkerchief over his face seemed to appear out of nowhere and pointed to the stairs. ‘Anyone who can get up and walk, get up now,’ he urged the other people on the floor.” But she cannot identify the man. Crowther was a volunteer fireman who always carried a red-print bandanna in his back pocket. But his family and friends, who’d have made the connection, don’t see the article.

3.19.2002: Crowther’s remains are found near firefighters and emergency workers killed at a command center in the lobby of the south tower. Notified three days later, his family will note the significance of the date he was found: 19 was his lucky number — the one he wore playing varsity hockey at Nyack High School and lacrosse at Boston College.

5.25.2002: A New York Times article about the upper floors of the Trade Center on Sept. 11 says a “mysterious man appeared at one point, his mouth and nose covered with a red handkerchief” to help rescue several women from a dark, smoky stairway. One, Ling Young, says that she was steered toward safety by the man; that he called, “This way to the stairs!”; that he followed her down the stairs, carrying a woman on his back; that when they reached clearer air, he put the woman down and went back up the smoky stairs. But no one can identify the man.

5.26.2002: “Oh my God, Welles, there you are!” Alison Crowther reads the Times story and realizes the unidentified hero was her son, who since elementary school had carried a bandanna — a habit he picked up from his father, Jefferson. She overnights Ling Young, who’s mentioned in the story, a photo of her son. Young confirms that the man, who’d taken off the bandanna to speak to her, was Crowther. “You don’t forget a face like that,” she tells Alison. Two weeks later, the TheJournal News of Rockland County, N.Y., identifies the man in the red bandanna as Crowther. It quotes Young as saying that although he saved others, “he didn’t save himself.” 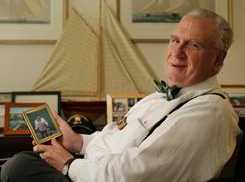 Spreading word: Jefferson Crowther holds a photo he took of his son, Welles. He says his job is to tell as many people as he can of his son's bravery on Sept. 11.

6.23.2002: Alison and Jefferson Crowther have lunch at home with two women Welles helped, Judy Wein and Ling Young. Young is still in a wheelchair, recovering from burns. They drink water from Lourdes, the pilgrimage site in France, which Alison says helped her deal with despair over the loss of her son.

6.8.2003: Crowther’s parents remove a red bandanna to unveil a bronze plaque dedicated to their son at Empire Hook & Ladder Company No. 1 in Nyack. Crowther joined his father as a volunteer at the fire company when he was 16. Ling Young attends the ceremony. “This brings back memories,” she says. “I’m glad I found him and know who he is.”

12.15.2006: Crowther becomes the first person to be posthumously made an honorary member of the New York Fire Department. “Under the most hellish of situations, he … saved all those lives,” Fire Commissioner Nicholas Scoppetta says.

10.20.2007: The annual Red Bandanna Run, a 5K run around the campus of Boston College and the Chestnut Hill Reservoir, raises funds for the Welles Crowther Memorial Trust. Crowther graduated from BC in 1999. There’s also an annual Red Bandanna Skate in his hometown. “When children and adults hear Welles’ story, it changes them,” says his mother, Alison. “It brings such a light into their soul — it’s a beautiful thing for us.”

8.8.2010: The Welles Crowther Memorial Trust gives $1,000 to send Joshua Colas, a seventh-grader from White Plains, N.Y., to the World Youth Chess Championships in Greece. On Dec. 15, Joshua will take the national seventh-grade title in Orlando. Two days later, he will become the youngest African-American chess grandmaster by defeating Leonardo Martinez at the Marshall Chess Club in New York.

9.12.2010: Musicians from some of New York’s greatest orchestras take the stage at Grace Episcopal Church in Nyack with red bandannas tied around their arms or tucked under their instruments and perform a concert in memory of Crowther. The concert, in its ninth year, aims to help heal painful memories with Bach, Debussy and Schumann … “music with a message of hope,” Alison says.

2.25.2011: Alison and Jefferson Crowther visit a new exhibit in their son’s honor at the preview site for the 9/11 memorial museum in New York. The exhibit features photos of Crowther, a recorded interview with his parents … and one of his signature red-print bandannas.